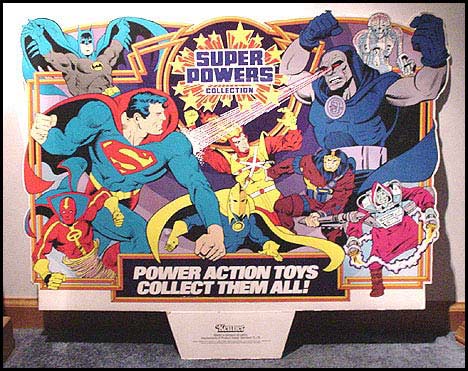 This is a beautiful example of a retail display used to advertise the Super Powers line in stores. It is double sided and features the same image on both sides of the display. This display would be mounted on the top of a shelving unit where product was offered. It was obviously used to promote the 2nd series toys. It is similar in nature to the 1st series header shown here. In my experiences the 2nd series header is slightly rarer than the 1st series one, although both are quite difficult to locate. Kenner widely used dynamic displays of this nature in the 80's. In my opinion the vintage displays are in a league of their own when compared to the mundane images used on current toy line displays.