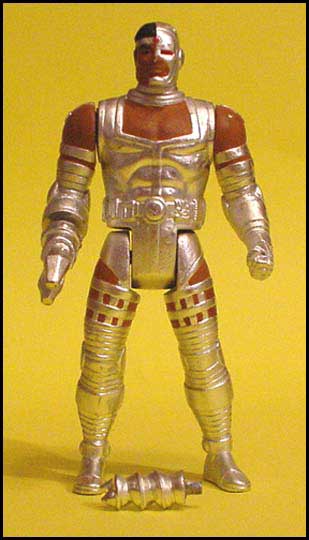 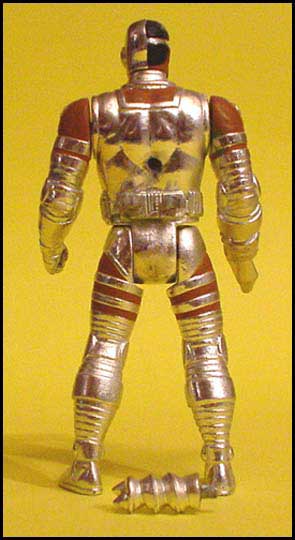 Cyborg is arguably one of the most popular and notorious figures from the Super Power line. He's also the rarest of the produced figures in both carded and loose form. So, what's even better than a rare Super Powers figure? A hand painted hardcopy of said figure, of course! This hardcopy, like all other hardcopies, is hand cast from a silicone mold and was later hand painted at Kenner for photography purposes.

This is the exact Cyborg prototype used for photography in the 1986 Toy Fair catalog. The above photo shows the prototype in use many years ago. The history of the piece is well documented and adds to the appeal of this prototype. It's pretty amazing to see something like this still in existence 18 years after the hardcopy served its ultimate purpose.

In the left photo one can see the figure's back exhibits a small hole for placement of a pin. During the catalog shoot, figures were mounted onto a board for photography. This clearly explains the presense of the hole. On the right we see a close-up of the hardcopy drill attachment on the left and the production toy's attachment on the right. Sadly, Cyborg's hand attachment doesn't seem to have survived the test of time, but thankfully the drill and claw attachments are still present. The hand attachment was not present in the '86 Toy Fair catalog picture, so in a sense it isn't surprising that the hand isn't present with this hardcopy.

This shot shows the Cyborg hardcopy completely disassembled, a characteristic indicative of hardcopies. The head, limbs, and hand pieces all connect to their respective areas through the use of plastic pins. Small metal dowels are commonly used for attachment on hardcopies too.

Finally, I've included a comparative photo illustrating the differences between the hardcopy on the left and the production figure on the right. The hardcopy is slighlty taller than the production figure since resin isn't as susceptible to shrinkage like injection molded plastic. You may notice the hardcopy is a much duller silver color than the production toy. It appears this flatter finish was employed to cut down on glare during the photography session. It's a quite striking color difference and is very noticeable upon close examiniation of the '86 Toy Fair catalog photograph.

Many of the prototypes used in the photography session were resin hardcopies, while a few were internal first shots cast from low yield aluminum molds. Samurai and Mr. Miracle were both IFS's, while Cyborg, Golden Pharaoh, Tyr, Mr. Freeze, Orion, and Cyclotron were all hardcopies. I'm uncertain which material Plastic Man and Shazam were cast in as those two represent the only 3rd series characters that haven't surfaced from the photography shoot. Check out the 1986 Toy Fair Catalog to see the full pages.