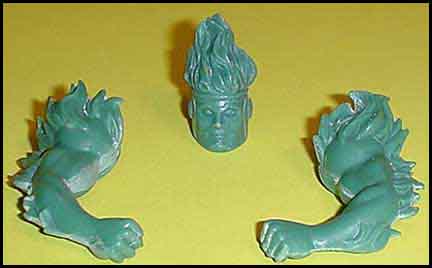 While these hardcopy pieces are very visually interesting, the history that accompanies them is the most exciting aspect. The head is a standard hardcopy for the Firestorm figure. While it isn't apparent at first glance, the arms also belong to Firestorm! When I first came across these pieces, I wondered if they represented arms for an unproduced character with furry arms. I was informed that these arms simply represented an alternate sculpt for the arms that went unused. The "unproduced" portion of my first impression was the only thing that ended up being correct. It turns out that the unproduced "Power Plus" deluxe line included a rendition of Firestorm featuring flaming arms. In addition to the arm pair shown here, a second more complete hardcopy set exists that also features the torso.

Hardcopies are produced using a silicon mold (this mold is created from the original wax figure sculpting). Once it is removed from the mold it may serve a number of purposes. It might remain unpainted and ultimately be used to create a negative epoxy "hardmold", which is used in the cutting of the steel production mold. This negative epoxy mold is essential since one cannot pantograph from a positive object to yield a negative mold. The process must be done from negative to negative. When used for this purpose, the hardcopy is referred to as a "tooling master" or "tooling hardcopy".