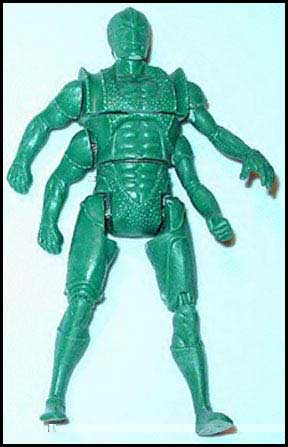 The unproduced 4th series Super Powers action figure assortment has received great attention from collectors over the years and continues garner interest. Quadrex represents one character with tangible three-dimensional evidence of his planned inclusion in the cancelled 4th series figure wave. While conceptual art has surfaced calling the character Bio-Bug, it seems clear Kenner axed that name and planned on releasing the character under the name Quadrex.

As one can see from the picture above, the piece is cast in a green urethane, commonly referred to as "dynacast". This material was prominently used for hardcopies during the mid-80's. Hardcopies are used to create molds cut directly into steel; these steel molds are used to produce the plastic action figures. As the name implies, hardcopies are direct copies of the original wax sculpting. Once a sculpting is completed and approved, silicone molds are made from each individual component of the sculpting. Quadrex is comprised of 12 individual components due to the complexity of his torso (3 pieces) and the two extra arms. A standard character like Batman consisted of only 8 components at the sculpt and hardcopy stage(head, torso, right arm, left arm, upper left leg, upper right leg, lower left leg, and lower right leg). So, twelve mold cavities were required to cast this hardcopy back in the day.