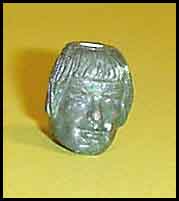 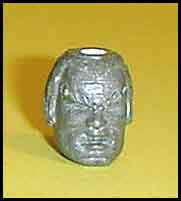 Showcased here is an unpainted Orion hardcopy head from the 3rd series line. The piece is cast in a grey resin. While this color of resin is not nearly as abundant as the green dyncast, I have seen it used on a few 3rd series prototypes.

Hardcopies are produced using a silicon mold (this mold is created from the original wax figure sculpting). Once it is removed from the mold it may serve a number of purposes. It might remain unpainted and ultimately used to create the steel tooling for the figures. Extra hardcopies are poured as a precaution, should something happen to the tooling master. These extras would remain unpainted as well. If a hardcopy is not destined for tooling or backup, then it will more than likely be handpainted for use in catalog photography, trade shows, or as a paintmaster. Most paintmasters for the Super Powers line are cast in milky white proto plastic (commonly referred to as internal first shots), but I have seen dynacast paintmasters.

Above one can see a hole drilled through the head. A metal dowel would have gone through the head, connecting it to the torso and helmet. Normally the hole for the head to torso attachment doesn't go through the entire head. The helmet and action feature made Orion an exception.