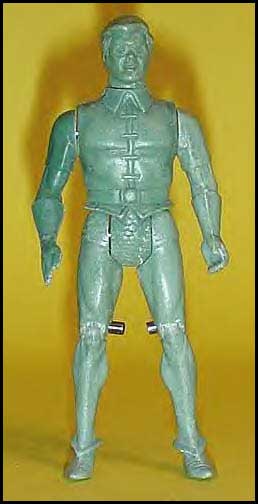 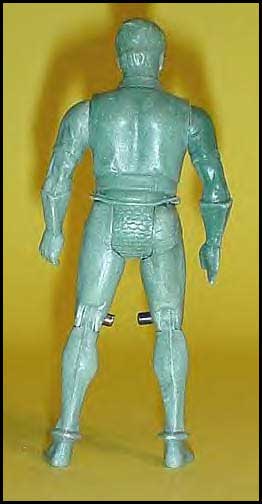 Showcased here is an unpainted Robin hardcopy. The piece is cast in a green urethane, commonly referred to as "dynacast". This material was prominently used for hardcopies during the mid-80's.

Hardcopies are produced using a silicon mold (this mold is created from the original wax figure sculpting). Once it is removed from the mold it may serve a number of purposes. It might remain unpainted and ultimately be used to create a negative epoxy "hardmold", which is used in the cutting of the steel production mold. This negative epoxy mold is essential since one cannot pantograph from a positive object to yield a negative mold. The process must be done from negative to negative. When used for this purpose, the hardcopy is referred to as a "tooling master" or "tooling hardcopy".

Extra hardcopies are also poured as a precaution, should something happen to the tooling master. These extras would remain unpainted as well. If a hardcopy is not destined for tooling or backup, then it will more than likely be handpainted for use in catalog photography, trade shows, or as a paintmaster. Most paintmasters for the Super Powers line are cast in a milky white proto plastic (commonly referred to as internal first shots), but I have seen dynacast paintmasters.

Here we see the hardcopy in a disassembled state. I should point out that the lower and upper leg pieces come apart as well, although they are shown pinned together in this photo. The arms, legs, and head are always attached to the torso via metal dowels. It is common for these dowels to be missing in many instances.

The above shot shows the hardcopy on the left and the production figure on the right. Astute eyes will notice the hardcopy is slightly larger than the production toy. Resin such as dynacast is not susceptible to shrinkage like the injection molded plastic used to create the production toy. Collectors should always look for this size difference when evaluating a hardcopy. Hardcopies never possess copyright information or holes in the feet, since these are added much farther along in the production process.