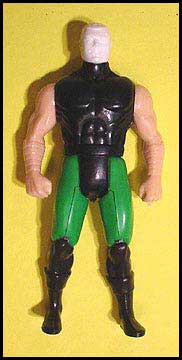 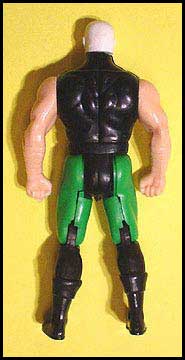 Showcased here is an unpainted Shazam first shot. Shazam is cast in totally nonproduction colors lending it vast eye appeal. First shots, sometimes referred to as test shots, are used to test the steel molds prior to mass production. The color of the injection molded plastic didn't matter since the figure was just a test. Typically nonproduction colors are more desireable to collectors.

Above is a comparison with the fully painted production figure. Notice the production figure exhibits a torso and arms cast in red along with a flesh colored head. The first shot on the other hand is cast in white, black, and green. You cannot tell from the picture, but this piece was not sonic welded together and can be fully disassembled.