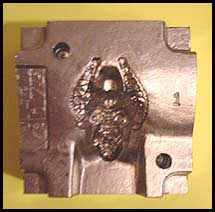 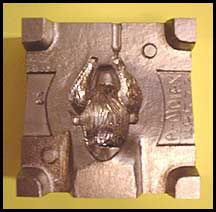 Manbat was slated for release as a 4th series villian. Unfortunately the line was cancelled and no 4th series figures shipped to stores. This piece conveys just how far Manbat made it in the production process. The two piece berylium/copper mold shown here is the final stage in a figure's journey to becoming a produced action figure. This is the actual mold from which all production Manbat heads would be created.

If you closely examine any production or first shot action figure, you will notice there are lines in the center of each piece (head, arms, legs, and torso). These lines are referred to as parting lines. The parting line corresponds to the area where the mold separates in two. This mold helps illustrate this concept very clearly. Production molds are few and far between in today's hobby, making this a very significant prototype.

The manbat head mold consists of two separate halves. This design allows the mold to separate and the head to be removed from the mold. Plastic is injected into this mold at high pressure and once solidified, the mold yields a figure part. Take note of the hole in the middle of the joined mold halves shown in the above picture. This is the exact location where the plastic was injected. The detail inside both mold halves is incredible. Manbat was sculpted with great detail, especially the hair on the head.

This flesh colored head came directly from this mold and was shot during the vintage era. The minute detailing is incredible. This is the only first shot example that has surfaced to date. Prior to this head and mold, it was uncertain whether Manbat made it past the hardcopy stage, but we now know it certainly made it to the first shot stage. Questions currently arise in my mind about Quadrex. If Manbat made it this far, could tooling also exist for Quadrex? It is feasible, although only hardcopies of Quadrex have surfaced to this date.

Finally, we see a picture of the first shot head inside the back mold piece. It looked exactly like this after the head was shot and ready to be removed from the mold. After purchasing this mold and first shot head, I vowed neither would not be used to produce any copies of the Manbat head. Reproductions, although sometimes created with good intentions, can be problematic from my perspective due to the potential for resale down the road as authentic prototypes. I dislike seeing fellow collectors fall victim to scams where reproductions are sold as legitimate prototypes, so I feel it's the most responsible action to take. Collectors can rest assured that these Manbat items resides in safe, honest hands.