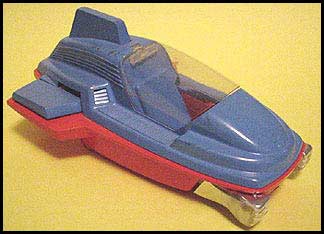 Above we see a very interesting piece of Super Powers history. This is an early conceptual piece for Superman's Supermobile. It is fairly detailed for a conceptual item and originated from a gentleman who did freelance work for Kenner in the Super Powers era. It is cast in a white plastic, which I believe to be protomolded plastic, and handpainted.

Here we see a side view of the vehicle. You'll immediately notice a huge difference between this and its production counterpart. The conceptual piece has extendable fists on the front, while the produced version had a battering ram type apparatus. The fists are painted silver and can be extended when pulled. They quickly return back since a spring mechanism is attached internally to them. I'm actually surprised they didn't go with this version. The fisted version of the ship was produced in a small and large diecast form by Corgi toys, so consumers probably had exposure to that design. The presence of the fists is by far my favorite aspect of this piece. Another interesting aspect is the side fins. They are cabable of moving up and down. The produced version of course had immoveable fins that simply angled down on the side of the ship.

Here you can see one of the fins in the raised position. These fins are present on both sides and both are fully moveable.

Above is a front view of the ship. You can see both fists ready to pop out and nail the bad guys! You'll also notice there is a front landing gear that can fold down. Yet another intriguing feature of this vehicle.

Finally, we come to the bottom of the ship. You'll notice two wheels near the middle of the rear section and a larger wheel near the front. This view affords another good shot of the fists too. I feel very fortunate to have this piece in my collection and find it incredibly fascinating to learn they considered a much different style for the Supermobile. As great as the produced version looked, I think the fisted style surpasses it by far.