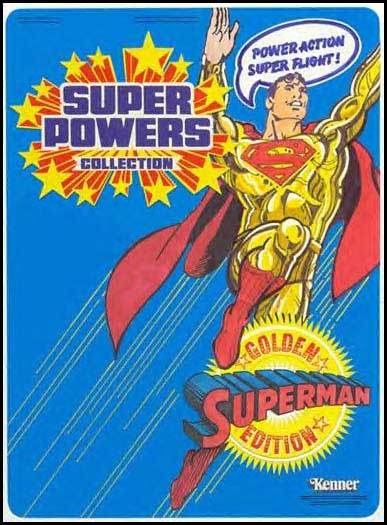 The incredible artwork shown here, coupled with information from a few other credible sources, documents Kenner's planned, but unrealeased, gold version of Superman to coincide with the Man of Steel's 50th anniversary. This artwork, a mock up for the Golden Superman packaging's front side, features a mixture of artwork, hand coloring, and pasted pieces. The Super Powers Collection logo appears to have been taken directly from a production card and applied onto the artwork itself. The image of Superman is entirely hand colored and hand pasted as is the word ballon. The flight lines, which give a nice action feel to the character, are totally hand drawn. The Golden Edition Logo is an intricate three layer pasted on logo. Finally, the Kenner logo on the bottom right is a black and white element pasted on with hand drawn lines underneath it. This is truly a breathtaking piece of art.

As for the figure itself, Kenner planned to vac-metallize the normally blue portions of Superman's outfit in shiny gold coloration, resulting in a striking commemorative action figure. As the artwork states, the Golden Superman was slated to include a flight action as oposed to the previous punching action. Although Kenner planned to re-use existing tooling for the head and torso, new arm sculptings were crafted in a straight flight-like posture. The figure was also slated to feature straight legs as opposed to the more familiar two-piece jointed legs.

Special thanks go out to Peter LeRose for sharing pictures of this incredible unproduced card artwork.